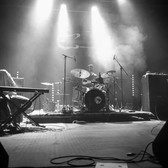 He attends the 'Kunst Humaniora' School in Brussels where he learns from Jef Neve, Stijn Wauters and Dieter Limburg (a member of the Brussels Jazz Orchestra).
He is admitted at the Brussels Royal Conservatory in 2010

The Band
Base-12 is a group of three young jazz musicians whose ambition is to take down the walls between jazz and more popular types of music, i.e. to reconcile jazz with pop and rock.
In January 2019, the band released their first mini-album, called "Blue Sunbeam.
Max Wolly, the pianist, is the founding member of the trio, but also the arranger and the composer of the group.

“Our music is at the crossroads of post-bop, cross over jazz and cool jazz. Our pieces are built like a story, mixing different universes. We want to break free of the codes of traditional jazz to be more in tune with our time and with today’s popular music, enriched with new influences, such as the urban afro trend.
A music that goes back to the basics
We are not looking for technical prowess: we are going to the essentials. We love the art of ballad, which allows us to plunge into the repertoire of the great masters with a fresh mind, with our own sensitivity and our own creativity. In this first EP, all the compositions are personal, underlines Max, even if they are inevitably influenced by my most significant inspirations. All these pieces have been unrolling in my mind since my childhood exposed to classical music and the rock of the seventies. My dream was to reconcile these two worlds. I had a very precise idea of the sound I wanted to create an energetic, liberating sound – thanks to the almost frontal presence of the drums and of the bass, his rhythmic partner.”

Max Wolly had lessons from Jef Neve when he was 15.
He studied music at the Royal Conservatory Of Brussels and made his first album with Base-12 (his jazz trio .
He has an other project called "Toc Toc" with a singer, bass player and drummer and played pop music.